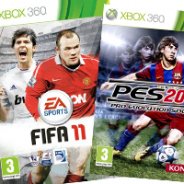 “Over the last couple of years, FIFA has been an excellent performer and we continue to grow market share over Konami. It also shows that our products do get better – FIFA’s Metacritic scores keep going up. We have a clearly superior product over Konami, which we did not have in the last generation.”

Sounds like fighting talk from Electronic Arts and with Konami’s PES 2011 also due for release in the next couple of weeks, it looks set for a battle of the football games once again. Fifa 11 is due for release on the Xbox 360, PS3, PS2, PSP, DS, PC and Mobile on the 28th September in North America (4th of October for the Wii version) and on October 1st in Europe. PES 2011 (or World Soccer: Winning Eleven 2011 as it is known in Asia) will be released firstly in Europe on the 30th of September and then in the UK on the 8th of October, giveing Fifa 11 a full week in the competitive UK market to stake it’s claim as the #1 football game.