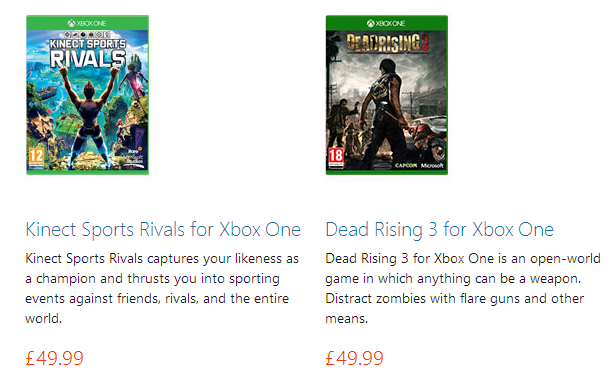 With the announcement of the next generation of consoles from Sony and Microsoft in the form of the PlayStation 4 and Xbox One respectively, there has also been quite a bit of discussion surrounding the pricing of games on the next consoles. Currently new releases for the PS3 and Xbox 360 generally cost around £40 from most retailers. With the Xbox One however, games will cost a bit more.

Microsoft have priced the games on their website at £49.99 and include titles such as Dead Rising 3, Forza Motorsport 5, Ryse and Kinect Sport Rivals. However in the US, the pricepoint between 360 games and Xbox One games remains the same at $59.99 which seems a tad unfair to those not living Stateside as us UKers were already paying more than our US counterparts anyway with this generation of games.

As of yet, Sony haven’t confirmed the pricing structure for their games but, it’s likely it will be the same, instead of more. Perhaps now they’ve heard Microsoft’s pricing they may even better it. Well we can hope anyway.