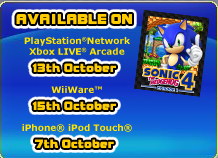 On the Xbox 360 there is also a trial game which, even if you’re a huge Sonic fan, like myself, you may want to download first as 1200 points is a bit steep. The game download size is 191MBs.

The game will also be released on the Wii from the Wii Ware channel from October 15th. Where iPod and iPhone users will have to wait until 7th of November before getting the game.

As for myself, I’ll be back later with more pictures and a short review on Sonic 4.