Well, it’s about time. EA have announced that the next iteration of the popular football video game FIFA will for the first time include womens international teams. We will see players from teams from Australia, Brazil, Canada, China, England, France, Germany, Italy, Mexico, Spain, Sweden and the United States of America in Fifa 2016. 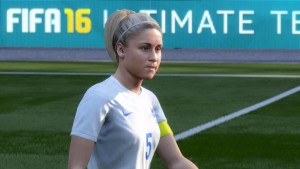 Current England Womens team captain Steph Houghton was on hand to celebrate as she will be featured in the game herself: “To be one of the first female players included is something we’ll always be able to look back on. Hopefully it will help raise the profile of the women’s game even further”
With the rise in popularity of Womens Football over the past few years, it’s great to see EA take the initiative and include the girls in a game that is undoubtedly a male dominated sport and game genre. You can take a look at a demo below showing the virtual women players in action: